The reason we have chosen these five activities out of the long list available in Tongariro National Park is that they can be enjoyed in all seasons. Simply pack your bags and head to our neck of the woods to enjoy them any time of year.

Our five picks for the best Tongariro National Park must-dos

The historical Ohakune Old Coach Road was originally constructed to form an integral link between two railheads from 1906 to 1908 before they were connected in 1908. Passengers and goods would be transported by horse and cart from one railhead to the other.

The Ohakune Old Coach Road fell into disuse after the construction of State Highway 49. Since then, it’s remained mostly untouched.

Today, the Ohakune Old Coach Road is a tourist hot spot, particularly for mountain bikers. The road is considered an easy grade two-track, taking around 2.5 hours to complete.

The cycle trail which uses most of the Ohakune Old Coach Road between Ohakune and Horopito is relatively new, having only opened in 2010. However, it’s added so much value to the region.

While riding through the historical landmark you’ll be surrounded by native bushland, you’ll ride over a mix of the old cobbled road and new narrow track, you’ll see remains of the railway itself, and you’ll see what a feat of construction the Ohakune Old Coach Road was for its time.

The Taranaki Falls are nothing short of impressive and best of all, very easy to get to. The 5.3 km walk to get to the Taranaki Falls takes about two hours. You’ll know you’re close when you hear the sound of the 20-metre waterfall nearby.

The Taranaki Falls formed some 15,000 years ago when a large andesite lava flow was created during an eruption. The waterfall plummets over the rugged volcanic formation and into a boulder-ringed pool.

The short walk to the Taranaki Falls is a loop track and easy to navigate. You’ll walk alongside the beautiful Wairere Stream, pass through tussock and beech forest and see the way volcanic activity has shaped the area.

If you’re up for an authentic Tongariro adventure, tramp the Tongariro Northern Circuit.

The Tongariro Northern Circuit is a four-day journey that can be hiked in either direction and one of the Tongariro National Park must-dos that will appeal to the more adventurous. Each leg of the journey finishes at the well-marked huts and campsites along the trail.

The variety of the sights you’ll see along the Tongariro Northern Circuit will surprise and astonish you. On the 43 km adventure you’ll see the desert-like landscape, the tranquil lakes and streams, ancient lava flows, volcanic formations and much much more.

Catch the Sky Waka to the Knoll Ridge Chalet

The opening of the Sky Waka gondola has been a highlight for 2019 and we’re excited to see what it brings to the region this coming summer.

This luxury gondola has transported thousands up Mount Ruapehu over the 2019 ski season and every visitor has been impressed by this incredible structure. The Sky Waka will continue to run through the summer season, allowing visitors to broaden their sightseeing opportunities in Tongariro National Park.

Soak in the views, enjoy a bite to eat and then board the Sky Waka back down the mountain. This is a meal you’ll never forget.

Trek to the Tama Lakes

When it comes to sightseeing in Tongariro National Park, we really are spoilt for choice. All you need to do is look around to appreciate the vast beauty the area has to offer.

But sometimes going that little bit further really pays off and as one of the Tongariro National Park must-dos we recommend, this is definitely the case when visiting the Tama Lakes.

The Tama Lakes are made up of six explosion craters that were formed during an explosive period of eruptions around 10,000 years ago. The lakes can be found in the Tama Saddle between Mount Ruapehu and Mount Ngaruahoe.

To get to the Tama Lakes takes around 2.5 hours, making it about a five-hour round trip. This medium-grade walk is extremely rewarding and you’ll see why once to set eyes on the stunning crater lakes.

You’ll find the Tama Lakes a little further on from the Taranaki Falls. After reaching the falls, the track continues through alpine forest and tussock. It then branches to the left where visitors can choose to see the Tama Lakes or carry on straight to the Waihohonu Hut. 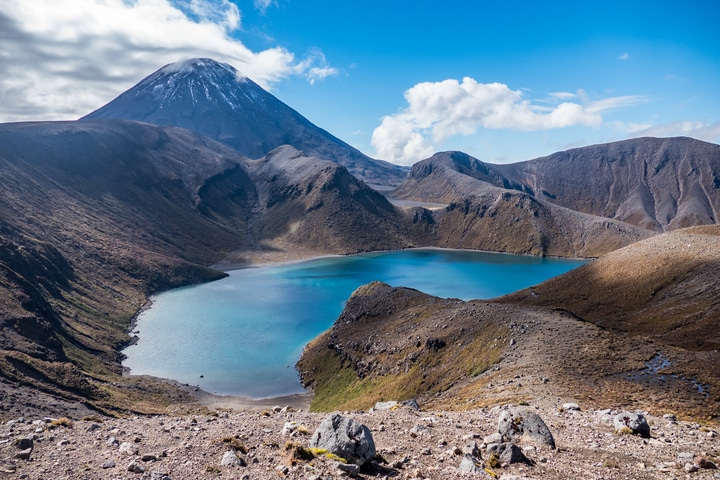 When you step out of The Park Hotel, you’ll realise how close you are to all the amazing sightseeing and adventuring opportunities in the area. Our convenient location means you can book your stay knowing that you won’t have to venture too far to find the best that the  Tongariro National Park has on offer.

These Tongariro National Park must-dos are without a doubt some of the best activities you can do while you’re here.

Whatever kind of adventure you’re after – water sports, hiking, cycling or fishing – Tongariro National Park is where you’ll find it all. Call us today to book your holiday.